SHARK VALLEY, Fla. — Thirty-two years ago, Alagoii, dressed in hand-woven clothing, was making colorful necklaces for herself by carefully picking up tiny plastic beads with a needle under a chickee hut newly built for her marriage.

On a winter day a few weeks ago, she was still under a Miccosukee Indian Village chickee— but a different one this time — making the necklaces for tourists who visit the exhibit area each day.

Alagoii, who would rather be called by her recently given English name, Marie Jim, is stringing beads as necklaces for curious tourists of many different nationalities and ethnicities. The table was filled with her creations and it showcased her American-Indian crafts skills.

But the items were an odd contrast to the conspicuous “Incredible Hulk” image on the black T-shirt she wore.

“Oh, I am a serious fan of Incredible Hulk, Spiderman, Bruce Lee, SpongeBob…,” said the 48-year-old Marie in understandable English. “I collect all kinds of T-shirts that are printed with those images from the movies.”

She paused, thought for a moment, and then continued.

“I put Bruce Lee’s picture in my wallet when I was young,” she explained with a laugh on her round face.

In the Miccosukee Indian Village, located less than an hour by car west of Miami, local Native American Indians like Marie are becoming more Americans than Indians. With the opening of the reservation in the 1930s, 626 villagers from about 125 families have unavoidably adapting their lives to the modern outside world— mostly the commercialized side of American life.

They’re enjoying the convenience brought by the new life— fancy cell phones, digital cameras and new cars— that have replaced a more primitive lifestyle that included wooden hand-carved canoes that were the only transportation for the tribe. 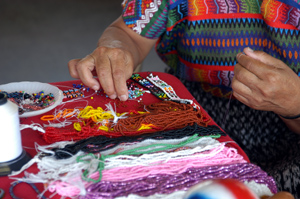 Marie is now working in the Miccosukee Indian Village exhibition area where she lived for 12 years until 1983, when her home was rebuilt into the current exhibition area.

Like most of the other villagers, she is now more willing to sleep in the red-tiled roof apartments than in the traditional chickee huts that are covered with dried palm leaves native to the Everglades.

Their new apartments are furnished with personal computers, air-conditioners, digital music systems, DVD players, refrigerators, microwave ovens, washing machines, and just about anything else you can think of that is used today by a typical American family.

The 70-year-old Tamiami Trail highway, also known as U.S. Route 41, brings Miccosukees not only the electronics of modern life, but also new world lifestyles from 35-miles-away metropolitan Miami, with its international atmosphere on the Florida east coast.

Accepting contemporary world living first requires command of English as a second language. In 1974, just 12 years after the tribe was federally recognized (separating the Miccosukees from the Seminoles), the group established its own school where children are still given a bilingual education.

A new problem, however, has emerged.

“The kids now speak so much better English than our own language that they sometimes have difficulty talking with their grandparents, who didn’t learn English when they were young,” said Marie, who learned English herself by watching TV and DVD movies that she purchased from Dolphin Mall in nearby Miami (about a 30-minute drive from the village).

Besides going to such shopping malls, Miccosukees more often than not find entertainment just about everywhere. This includes going to concerts, visiting hair salons, and playing snooker in their own casinos. They do, though, still preserve their traditional Green Corn dance to celebrate the gift of corn, which is the secret of their tribal strength.

Young people, in particular, are attracted by the powerful non-Indian culture. Compared with three or four days’ canoe ride from the village to Miami several decades ago, 30 minutes in a car today makes it much easier for them to experience the draw of city lights. Unfortunately, some of them get involved in drugs and and consume alcohol because of their rising incomes.

“We always teach young people to stay away from them, but very often they just want to do more,” said Lee. Tiger, 55, is a son of the former chairman of the tribe, Buffalo Tiger.

“The non-Indian culture is so powerful, especially in such big cities as Miami, that it will simply swallow you up,” he explained.

Along with drugs and alcohol, the Americanized life brings about other problems. Fast food causes obesity, diabetes and heart disease. Villagers also get sick from eating fish caught in the neighboring Everglades that has been poisoned by the chemicals from Miami.

Swampy and green, the Florida Everglades is the home of big alligators, lurking snakes and annoying mosquitoes. Nowadays, tourists are no longer afraid of these creatures, but many visit the area to see the wildlife and to explore the traditional lifestyle of this mysterious tribe. The booming tourism brings more jobs and money for the Miccosukees, thus playing a great role in the tribe’s economic development.

“In the past, kids were only given a few pennies to buy some candies,” said Lee Tiger. “But now, people are willing to give kids thousands of dollars to get more than enough candies to eat to get sick.”

Others work at the village with Marie. They include 57-year-old Florencia, a native Indian from Guatemala. Florencia also makes bead necklaces and weaves clothing. She answers a visitor’s question automatically without even raising her eyes.

“Buy them in the gift shop,” she utters in awkward English no matter what she is asked by tourists who come to her hut. It seems that she, although a native Spanish speaker, has learned just enough English to communicate a little with visitors.

The swarming tourists from every corner of the world also bring a challenge for villagers who have been trying to preserve their traditions. It is not uncommon to find visiting families from Brazil, Germany, France, and the United Kingdom walking around the village.

The tribal chairman decided to set an exhibition area open to tourists in 1983, including a family living chickee, a cooking chickee, the basketry and crafts area where Marie and Florencia work, and a museum that was recently added.

Younger generations in the tribe are caught between the modern world, the tourists who come to their village, and their tribal traditions. They are still taught by family leaders to listen to the wind with their hearts. They know the meaning of their tribal flag: White means birth, red means blood, black means death, and yellow is the color of the corn that they used to rely on.

Time proves that very few Miccosukee villagers ever left the tribe for which they have a deeply rooted love. Tourism provides hundreds of jobs for villagers in the hotels, casinos and tribal administrative offices. Among some 500 employees in the tribe, however, about one-third are non-Indians who are experts in different specialties such as law, medicine and even filmmaking.

“We encourage young people to study in the universities like Harvard or Yale so that we will have our professionals to work in the tribe,” said Lee Tiger, wearing a vest of the tribal flag colors.

Huston Cypress, 22, is an example. He is studying theatrical film production at the Miami Art Institute, but wishes to return to the village to work for the tribe when he graduates. Now he is working on a documentary film about the Miccosukees, hoping the native Americans will get better known by the world.

Overall, there are 562 Indian tribes in the United States, with a population of two million, less than one percent of the American population. The Miccosukees stayed to themselves in the Everglades region for about 100 years, resisting efforts to make them like everybody else, until recently.

To Gosia Tiger, 28, originally from Poland, her husband Lee is more American in their material life. They eat American food and drive cars, just like every other South Floridian.

“In the spiritual life, however, he is more Indian,” she explained.

“There is a bridge to go from the tribe to the city, from tradition to the modern. You can stay in the middle, or whatever a position you like,” said Lee Tiger. “It’s your personal choice.”