PHILADELPHIA— The Liberty Bell is an icon in American history.

It is known around the world.

“The bell is, if not thee, one of the most famous historical icons for the United States of America,” Jolly said. “It’s a symbol of the American Revolution and freedom.”

The Liberty Bell Center, located here in the center of the city and near Independence Hall, is a self guided tour facility with the history of the bell written on display walls, along with videos and display cases of artifacts.

Visitors can view pictures of dignitaries such as Nelson Mandela visiting the bell for a symbol of freedom in 1992 when Apartheid in South Africa ended. World fasmous Tibetan religious leader the Dalai Lama also recently visited the Liberty Bell.

Located directly across the street from the historic Independence Hall, the bell draws millions of visitors a year. The bell is visited by locals, school groups, and people from other countries including China, Japan, Korea, Russia and Africa.

“If put into thirds, one third of visitors are foreign delegates and the other two thirds are from America,” Jolly said.

The peak seasons for the Liberty Bell are from April to August.

New resident to the Philadelphia area Alleen Andre visited the bell as a tourist attraction.

“I have guest from out of town, and I wanted to bring them to this historical site to relearn our history,” Andre said. 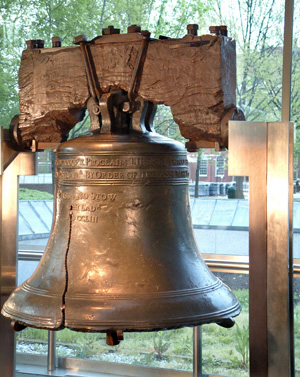 Other visitors such as John Gast, a sixth grade history teacher, brought his class as another way to learn history.

“I wanted my students to actually see history, instead of just read about it in the books,” Gast said.

The bell was ordered by Isaac Norris in September 1752 from the White Chapel Bell Colony in England as the state bell for Pennsylvania.

He asked that the inscription be taken from Leviticus 25:10 in the Bible: “Proclaim liberty throughout all the land unto all the inhabitants thereof.”

Once the bell had arrived in America, it was not well received. The sound of the bell when it rang did not have a good tone to it, so they tried to have the bell fixed by some locals.

“They did not like the tone of the bell and they thought about sending it back,” said Bob Gianni, Liberty Bell historian.

The bell that is seen today was made from the mold of the original bell that was made in England. The bell has the names of John Pass and John Stowe, who were the makers of the new bell.

The bell was then placed in a tower of the state house from 1776-77, but because the tower was made of wood, it began to deteriorate. The state house had gained the name of Independence Hall in 1825 and a new steeple for the bell was built.

The bell received the name Liberty Bell from a group of abolitionists who were trying to eliminate slavery in the new nation.

The last time the bell rang was for George Washington’s birthday in 1846.

“It last rang in 1846, but it still rings through its inscription,” Gianni said.

Following the Civil War, the bell was taken on cross-country tours to help heal the country’s division. The last time the bell was moved from Philadelphia was for the Panama Pacific International Exposition in San Francisco in 1915.

“The tours stopped in order to preserve the bell,” Gianni said. “They didn’t want anything else to happen to it.”

The entrance of the Liberty Bell Center is located on 6th Street between Market and Chestnut streets.

By car: the Park is easily reached via I-95, I-76 and I- 676. From South: Take I-95 north. Follow signs for “Central Phila./I-676”. Exit onto 6th Street. Take 6th Street south to the underground parking garage entrance between Arch and Market Streets. 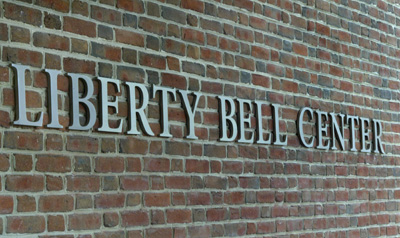 From North: Take N.J. Turnpike to exit 4. Take Route 73 north to Route 38. Take Route 38 west to U.S. 30. Take U.S. 30 west over the Benjamin Franklin Bridge. At the base of the bridge follow the signs for 6th Street. Take 6th Street south. there is an underground parking garage on the left between Arch and Market Streets.