SAN JUAN, P.R.—Dressed in white linen uniforms made to the precise specifications of the 18th century Spanish military code, volunteer members of the recreated 1797 Fixed Regiment of Puerto Rico wiped away beads of sweat as they stood at attention in the courtyard of Fort San Cristobal under the relentless rays of the hot Puerto Rican sun.

“Presenta las armas,” Lt. Colonel Hector Diaz shouted in Spanish at the line of uniformed men assembled in front of him. “Apunta…y dispara!”

The swift and simultaneous shift of the men’s shiny black muskets from their left hands to their right shoulders, following Diaz’s command to present arms, point and fire their weapons, culminated in an eruption of applause from the fort’s visitors that were gathered to watch this military reenactment.

Yet, while the regiment members lowered their weapons, bowed and posed for photographs, Diaz explained that it was these precise and well-practiced military drills that helped Spain successfully resist the British siege of San Juan in 1797.

“Just imagine, if the British had conquered the island, the Beatles could have been Puerto Rican,” Diaz, a Puerto Rican native and current Maryland resident, said jokingly with a warm-hearted grin.

As members of the Fixed Regiment of Puerto Rico, a living history group composed of volunteers that reenact the heroic events surrounding the attack and defense of Puerto Rico in 1797, Diaz and his regiment are among the many volunteers who dedicate their time and knowledge to the San Juan National Historic Site.

“Our volunteers play a principal role in the preservation of the park’s heritage,” Superintendent Walter Chavez said. “Without their continued support and help, important park functions would cease to exist.”

For example, Juan Amador, a native Puerto Rican and a park volunteer for a little more than one year, is responsible for everything from custodial cleanups to historical tours of forts San Cristobal and San Felipe del Morro.

“My goal as a volunteer is to help preserve the park’s majestic qualities, whether by collecting trash or educating school children about the forts’ historical importance,” Amador said. “I come to the park every Tuesday to help and go where the park needs me.”

Volunteer Coordinator Kina Gonzalez, a SJNHS park interpreter, notes that Amador’s service to the park over the past year has been invaluable.

“Besides the military re-enactors who come on a regular basis, either to practice drills, clean barracks or do weapons demonstrations, Amador’s reliability and willingness to dedicate his time as a volunteer has truly benefited the park,” Gonzalez said.

Doris Diaz, currently a museum technician who aids in the archiving of important historical documents within the site’s cultural resources department, started her career at the San Juan National Historic Site as a volunteer in 1996.

“I spent one of my summers as a volunteer cataloging old museum documents in the freezing temperatures of the archive room,” Diaz said with a shiver.

“Well, actually the room was probably only about 68 degrees,” Diaz said laughing, remembering the temperature. “But when you are born and raised in Puerto Rico anything below 75 [degrees] is cold.”

Diaz, however, explained that her work as a volunteer with the park’s archive collection not only solidified her interest in history, but also led her to pursue her masters degree in Caribbean history at the University of Puerto Rico through the Student Temporary Employment Program (STEP) offered by the National Park Service.

This non-competitive employment program allows park employees, like Doris, to work part time at a national park while enrolled in a university, graduate or professional school.

“I am still grateful for the opportunity afforded to me as a volunteer,” Diaz said. “It was through this experience that I was able to define both myself and my academic career.”

SJNHS Chief of Interpretation Joanie Budzileni agrees that volunteering is a “good way to get your foot in the door” if you are interested in pursuing a career within the National Park Service.

“We [the park] want to get the word out that volunteering is a good experience,” Budzileni said. “We are interested in recruiting both community residents and students, providing the students with internships and possibly future jobs when they graduate.”

Budzileni’s pitch is part of a volunteer recruitment initiative set forth by the San Juan National Historic Site to inform students and community members alike about the numerous volunteer opportunities available at the forts.

“The Volunteers-In-Parks (VIP) program initiated by the National Park Service 37 years ago enables us to utilize and accept help from the public, whether our volunteers come from the community, local businesses or scout groups,” Chavez said. 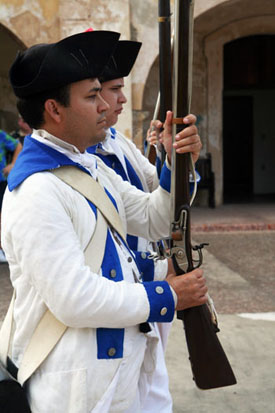 Yet, volunteers need only dedicate a mere two or three hours of their time on a monthly basis to become a full time VIP at the San Juan National Historic Site.

“We record our volunteers by the number of service hours they contribute to the park,” Chavez said. “Over the past year, our volunteers have logged more than 1,000 hours, so every little bit helps.”

“Really, we are focusing on getting the word out that there are opportunities available for people to help maintain our national heritage and preserve its structures,” Budzileni said.

“Our current volunteers want to be associated with the fort as much as the park wants to have them here—which is a lot,” Budzileni said smiling.

Amador and Diaz agree that there is no better reason or reward for helping to preserve the forts than the mere satisfaction of educating visitors about the significance and beauty of the site’s historical importance.

Adjusting the large pewter buttons on his white uniform coat before posing for his last photo in San Cristobal’s courtyard, military re-enactor Jose Hernandez, an Ohio resident, said he is pleased to be among the volunteers responsible for preserving the park’s heritage.

“Amidst the British attack of the fort in 1797, the first threads of Puerto Rican society emerged,” Hernandez said with a proud straightening of his stance. “This is why we chose to reenact this particular moment in the history of Puerto Rico because the regiment offers an inside look into what life was actually like for the first ‘true’ Puerto Ricans.”

The San Juan National Historic Site is open from daily from 9 a.m. to 6 p.m.

Before visiting the park, read up on the 1797 Fixed Regiment of Puerto Rico.

It is the only active reenactment group currently performing at the San Juan National Historic Site and it volunteers its services about three times a month.

So, more than likely visitors will run into one of the group’s 30 men in their historic military outfits while visiting either or both forts.

For more information about the regiment, visit http://www.puertorico1797.com/.

If you are interested in becoming a member of the San Juan National Historical Site’s VIP program, visit http://www.nps.gov/volunteer/ or contact Kina Gonzalez in San Juan at 787-729-6777, ext. 259, for more information.