Published May 4, 2016 By GIANNA NOLTE
School of Communication
University of Miami

GRAND CANYON VILLAGE, Ariz.—The sun crept over the horizon and the rocks were flashing shades of crimson, mud and blush. Perfectly constructed layers of stone stacked upon one another, built up the walls of the canyon. It was a crevice 18 miles wide, more than one mile deep and 277 miles in length.

I was five-feet, two-inches tall and trying to comprehend the enormity of the space surrounding me.

With the landscape dissolving into the 6:10 a.m. spring sunrise, the natural wonder in front of me triggered the question: how? How could nature create something like this to coexist with my small, human form?

I always assumed the canyon was simply carved by the Colorado River. But, what I discovered was that this surreal scenery took the work of more forces than just a body of water.

As American geologist Clarence E. Dutton eloquently said, “To the conception of its vast proportions must be added some notion of its intricate plan, the nobility of its architecture, its colossal buttes, its wealth of ornamentation, the splendor.…”

It is the Grand Canyon that has proven to be one of the most abstract examples of geological erosion with approximately 40 sedimentary rock types and a rich history.

The canyon began its formation 1.84 million years ago after the North American plate collided with a chain of volcanic islands off the coast. Due to the large amounts of heat and pressure from the collision, the basement rocks of the canyon were formed.

The Granite Gorge Metamorphic Suite, for example, is the oldest group of rocks in the Grand Canyon. These are found at river level and make up the basement rock layer of the Canyon.

One of the most distinguishable characteristics of the basement rocks is that they are some of the oldest in the world. Furthermore, they prove the tectonic plate collision and subduction zones were, in part, responsible for some of the canyon’s development. 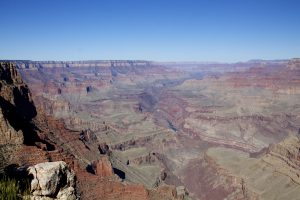 But, back to the river and how it even reached the middle of Arizona to help carve out the canyon. At one point in time, during the Paleozoic era, the oceans flooded over the land, including the area where the Grand Canyon now exists.

How do we know this? There is fossil evidence of marine life found in many of the canyon walls. After the waters receded and these creatures could no longer thrive, their skeletons were left behind and the river put down its roots.

The Colorado River once carried large boulders and heavy sediments that would continually wear away the Canyon, which triggered the building of the Glen Canyon Dam in 1963 to inhibit rapid erosion

“Here, we have this tremendous river flowing through,” continued Whitebread. “The Glen Canyon Dam controlled the flow of the Colorado River. It now controls the flow to about 13,000 cubic feet of water per second. If you can envision about 13,000 basketballs flowing by you every second that seems like a lot of water, but before the dams, in the springtime the floods or the snow melt could have the river flowing at up to 300,000 cubic feet per second.”

To compare how much Colorado River water is flowing through the Grand Canyon, the Mississippi River flows at less than a one-foot drop per mile.

“The Colorado River has been cutting, acting as a saw. And the river is getting deeper by the thickness of a piece of paper every year,” said Whitebread, demonstrating with his thumb and forefinger just barely touching.

As the river wears down and deepens itself, Whitebread also explained how the overbearing width of the canyon was made possible.

“It was caused by erosion,” said Whitebread. “Erosion caused by wind, snow, ice, where rocks continued to fall in [the river]. Before the dam, we would have boulders being washed down and those were really able to grind. Erosion will continue until the complete area is flat.” 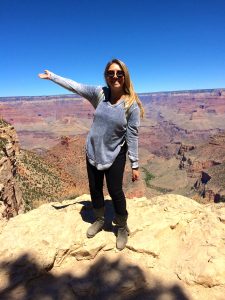 Still, the canyon rocks aren’t that simple. You also have to take into account the orderly stacks of rock

pancakes, piled a mile-high on top of the basement rock bottom. If you are looking out over the rocks from Desert View Watchtower, you will notice that they are slanted at a slight angle. This is an example of the tilting and erosion, known as unconformity is caused by the uplift from mountain building.

“Geologists say there could have been other grand canyons,” Whitebread said. “The Nile River is very similar, large and an arid, desert-like environment; and the Tigris-Euphrates in Iraq. But, the one thing they didn’t have was a tremendous uplift with the collision of those continental plates colliding and lifting this entire area up to 7,000 feet above sea level.”

In 1908, President Teddy Roosevelt designated the Grand Canyon a national monument and in 1919 it became a national park.

The mission of the National Park Service stems from Roosevelt’s words when he said, “Do nothing to the canyon. Man can only mar it.”