CHANTILLY, Va. — A short drive from Washington D.C., the Steven Udvar-Hazy Center here is wonderful museum that captures the past, present, and future of aeronautics. It is a learning experience beyond photographs and simulators providing an up close view of some of the most famous aeronautic designs.

The museum is located on 76-acre lot just minutes from Dulles International Airport.

The museum’s design is a reflection of the neighboring airport. The Donald D. Engen Observation Tower is a replica control tower that overlooks the runways of Dulles to give a bird’s eye view of the airport traffic.

This gives visitors a chance to see aeronautics in action demonstrating how modern technology, communication, and engineering come together. The museum, which opened in 2003, houses close to 50,000 artifacts.

Combined with the Smithsonian’s Air and Space Museum on the National Mall, together the two centers house the largest collection of air and space artifacts in the world.

Artifact exhibits range from helicopters to rockets to space suits.

Walking into the museum one silver plane to the left of the 293,707 square foot hangar stands out to most visitors, not just because of its size but because of the impact it had on the 20th Century, is the B-29 SuperFortress that dropped the atomic bomb on Hiroshima during World War II. 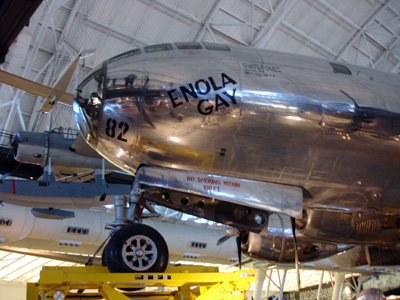 The plane, called the Enola Gay, has been the center of many heated academic and political arguments based on opposing views of the use of the plane.

The plane is somewhat shielded from visitors because attempts have been made to vandalize the plane.

But the museum is successful in creating a learning environment around the exhibit rather than a political one.  John Erkenbrack, 19, a student at James Madison University, was one of those crowded around the Enola Gay.

“I wrote a paper in high school about World War II, I never imagined I would be standing next to the plane that ended the war,” Erkenbrack said.

As he spoke he held out his digital camera so I could snap a photo of him and his girlfriend, Katie Uze, 18, in front of the plane. I followed the couple through the museum as they slowly winded their way around decades of aeronautic design. They stopped briefly behind a tour group after hearing the tour guide’s personal speaker pack he wore around his neck.

The tour guide began to talk through his microphone about the space shuttle Enterprise, on display in the McDonnell Space Hangar. The Enterprise is one of the largest exhibits in the museum and possibly one of the most groundbreaking for space exploration. 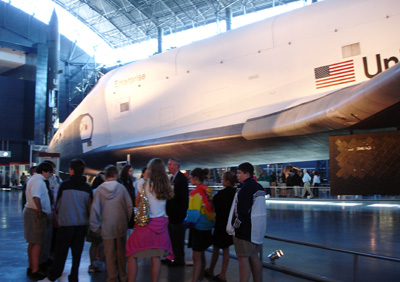 The Enterprise was the first Space Shuttle built for NASA and is considered one of the largest glider planes in the world.

While the shuttle was not capable of space travel it allowed NASA to test the craft’s abilities in the atmosphere. Surprisingly the Enterprise is named after the Starship Enterprise from television’s Star Trek.

“I was never a big Star Trek fan, but I still like the Enterprise,” Uze said.

After splitting off from the tour group the couple decided to catch the noon movie at the IMAX Theatre in the museum and I decided to tag along. The IMAX is a clear favorite amongst the many kids that visit the museum. The informative videos are a perfect way to see some of the crafts from the exhibits in action and their practical uses.

The films are an exciting journey into such subjects as life on Mars to Air Force Pilot Training, which was the subject of the noon movie. The movie described a Red Flag simulated air war at Nellis Air Force Base in Nevada.

It explains how the Air Force trains its pilots for combat and teaches them the importance of team work and communication. This high voltage ride follows the story of one pilot as he goes through the training. The cameras go into the cockpit and the information control towers to show viewers how aeronautic design is used in a practical way.

“I’ve never seen an IMAX movie before, the sound blew me away,” Erkenbrack said. “I love fighter planes so this was right up my alley.” 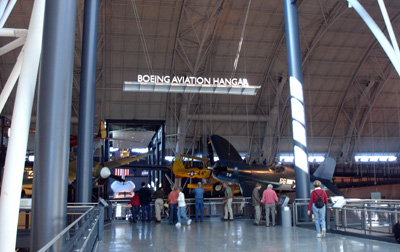 “He was silent throughout the entire movie, I’m not even sure he noticed when I went to the bathroom,” Uze said with a laugh.

“I couldn’t keep my eyes off the screen, I didn’t want to miss anything,” he explained of the six-story screen.

Back in the hangars, the museum allows visitors to walk underneath the bottoms of many crafts suspended in the air so they can see both the top, from the second floor, and the bottom from the ground. This creates a fun illusion of the aircraft flying through the air, a way to demonstrate typical flight maneuvers.

The museum is a fun place to take the whole family. It has something for every generation, from grandparents to grandkids. It has the usual things found in most museums like a gift shop and food service, but it also exceeds most expectations with unique additions such as flight simulators and informational videos throughout the exhibits.

Brad and Bonnie Long came with kids John 7, Wesley 11, and Mary Kate 10, to help their children learn about the history of aeronautics. The family lives near the museum and the kids have been to the museum before on school trips and with friends.

The location of the museum in Virginia makes it very easy for regional schools to bring children on field trips.

“I saw the movie about Mars,” Wesley said. 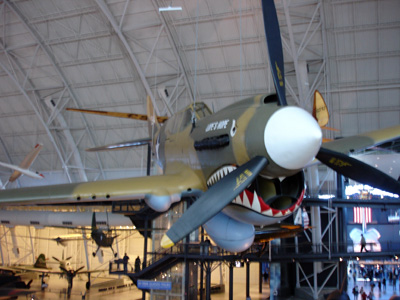 “John saw the movie about the Moon with his class,” Bonnie added. John, who has aspirations to become a stunt man, thought the museum was really cool.

An opinion he shared with Wesley and Mary Kate. For the kids it was a neat experience to see air and space crafts that they learned about in school up close.

For many kids, the museum takes lessons they have learned in the classroom and takes the lesson to the next level so students can see history only a few feet away. This type of history has inspired individuals throughout history.

The museum would not be possible without aviation businessman Steven F. Udvar-Hazy, who donated $60 million to build the museum. This was the single largest donation in the history of the Smithsonian Institute. The building now bears his name and his legacy of devotion to aviation and aeronautic design.

But Udvar-Hazy’s donation is not the last because the museum is not completed.

Like the history the museum seeks to preserve, the museum and its contents are constantly changing and growing creating a place for people of all ages to learn and enjoy the history of aeronautics. 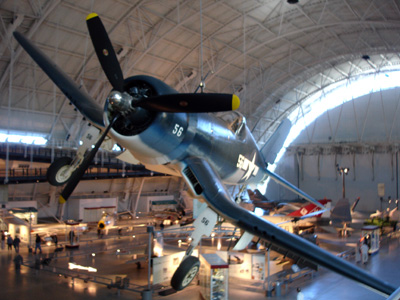 Virginia Regional Transit is currently the only public transportation operator that serves the Udvar-Hazy Center directly. The route provides connecting bus service between Dulles International Airport, Dulles Town Center and the Udvar-Hazy Center. Free transfers from other VRTA routes that transit the Dulles Town Center are available. Schedules, fares and information are available on the VRTA web site at http://www.vatransit.org/bus_schedules.cfm.

More information: 540-338-1610 or email kim@vatransit.org. There is no direct MetroRail or MetroBus service to the Udvar-Hazy Center. You may take a combination of MetroRail and/or MetroBus to reach Dulles International Airport or Dulles Town Center where you can transfer to a Virginia Regional Transit bus going directly to the facility. To quickly plan your MetroBus/MetroRail trip based on your departure place and time, use the interactive online trip planner at http://www.wmata.com/.The Washington Flyer provides service from Metrorail to Dulles Airport.  http://www.washfly.com/. 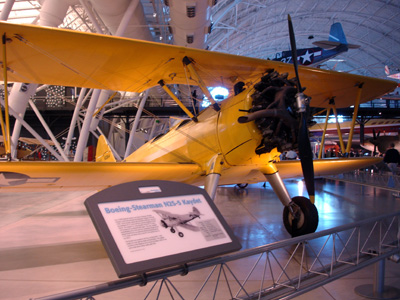 IMAX AE theater box offices are located at the National Air and Space Museum (both locations) and the National Museum of Natural History.

Additional fees, charged by the ticketing agent, of $1.50 per ticket and $2 per order (non-refundable) apply for tickets ordered online. Information on other film programs at Smithsonian can be found at http://www.si.edu/events/films.asp and the Smithsonian Institution IMAX theaters. Tickets may be purchased by phone by calling 202-633-IMAX (4629) or toll free at 877-WDC-IMAX (877-932-4629) seven days a week from 10 a.m. to 5 p.m., EST, except Dec. 25. There is a $2 per ticket fee (non-refundable) for tickets ordered by telephone. Show schedule and admission prices are subject to change without notice.